Showing posts from April, 2019
Show all

Is the Burgoyne Bridge the new Niagara Falls? 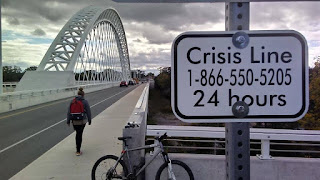 ** Trigger Warning: The topic of this blog is suicide. Ethical guidelines regarding media reporting on suicide are respected.**

It has now been officially declared that the Niagara Region is amidst a suicide crisis with a particular focus on the Burgoyne bridge in St. Catharines. My deepest condolences are extended to those who have been affected by these tragedies, including the families and friends of those who have died by suicide.
You will notice I said, died “by” suicide; it is also appropriate to say, died “from” suicide. Words matter. In my training, I was taught to never use the terminology “committed suicide”. Saying that someone has “committed suicide” implies criminality or sin, neither of which is true. It is unnecessary, pathologizing and leaves those affected with a negative connotation.
It is difficult to convey the overwhelming mental anguish and emptiness to someone who has never experienced depression. When your mind is plagued with depressive and suicidal thoughts, all…
Post a Comment
Read more
More posts